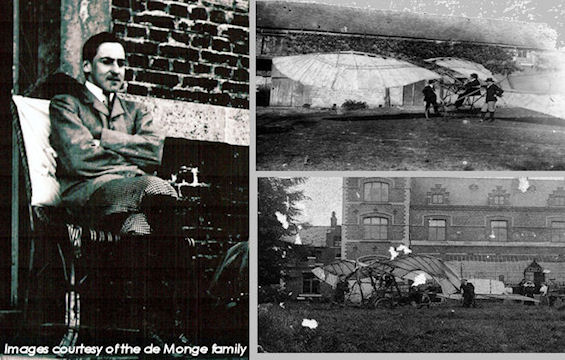 de Monge first came to prominence during the first World War when he designed and manufactured aircraft propellers mainly for the French government. he also worked for a spell with Buscaylet et Cie designing conventional parasol aircraft.

After the war, de Monge designed and built various aircraft and scale flying models such as the Models 7.4 and 7.5. He sold the design to the Dyle et Bacalan company in Bordeaux, France who wanted to utilise his designs to build a range of Trans-Atlantic aircraft. Sadly the designs were never put into production. However a prototype heavy bomber, the DB10 was based upon one of his designs.

In 1925, de Monge moved back to Liege, Belgium where he went to work for car and motorcycle manufacturers Impéria to head up their research department. While working as chief research engineer, de Monge worked on early versions of torsion bar suspension and automatic transmissions.

In 1937, de Monge was engaged by the famous Ettore Bugatti to design and build the Bugatti 100p race plane. The aircraft was nearing completion when the German Army invaded Paris during the second World War and was hidden in the French countryside for more than 30 years. The aircraft never flew and de Monge himself died in 1977.